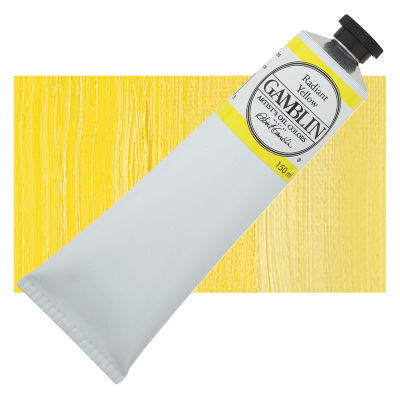 Use the following buttons to zoom in and out of the image
Gamblin Artist's Oil Color - Radiant Yellow, 150 ml tube
Current price:

Diarylide Yellow 83 has very good lightfastness and permanence. However, it can fade in tints, so some artists do not consider it suitable as an artists' color. Many other diarylide yellow pigments are reported to have fair to poor lightfastness, and some are completely fugitive. Diarylide Yellow 83 is reputed to be one of the most permanent of the entire group.

Diarylide Yellow has no significant acute hazards, but chronic hazards have not been well studied.

Diarylide Yellow comes from a family of azo pigments called Diarylide. These yellow hued pigments were developed around 1940 and are very important in printing inks.