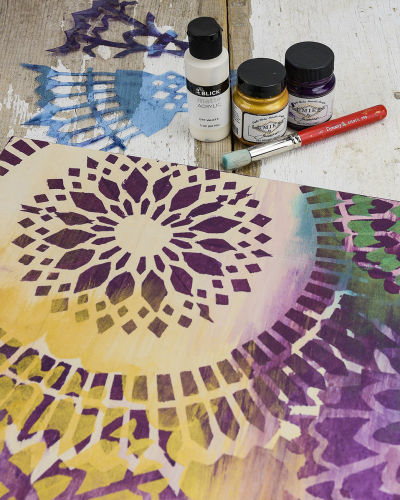 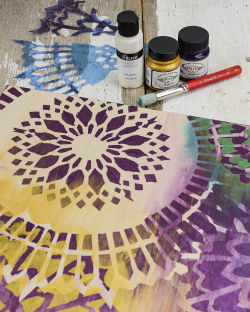 Find your creative calm with a meditative mandala project! Intricate mandalas may seem intimidating to create, but Julie will show you how to simplify the process by stenciling portions around an axis to form a whole image. Add layers of matte and metallic acrylic color for a relaxing, mindful proje...

1. Print and cut the template to your desired size. Plan accordingly, as the template will measure half the size of the total mandala diameter. For example, the 8" template will create a 16" mandala. Fold the template in half along the dark line. 2. Create a design in pencil on one half of the template, filling in areas to be cut with shading. Design inspirations are also provided. Some shapes can be cut from the sides, similar to cutting a paper snowflake, and some can be cut from the center with a knife. The design can be symmetrical or asymmetrical. Be cautious with shapes, such as letters, that will be in reverse on the other side of the template. 3. Fold a sheet of stencil film so that the template will fit inside the fold, then cut away any excess with scissors. Place the template so that the fold aligns with the fold in the film, then use transparent tape to secure. 4. Cut along the outside of template with scissors first, leaving space indicated by extended lines on the open side of template. Next, cut shapes from sides of template. Finally, cut inner shapes using a craft knife. 5. Open the film and remove the cut template. Set a household iron to the nylon setting, and place a piece of paper between the iron and film for protection. Iron until fold is flattened. 6. On painting panel, determine where you would like the first mandala to be placed and mark the horizontal and vertical axis with a pencil and ruler. Lines should be perpendicular to one another and form a 90-degree angle. 7. Align your template on one of the axis, with the small pointed end touching the point where the lines intersect. Using artists' tape, secure the template to the panel on both sides, pushing down with hands so it lies as flat as possible. 8. Load a stencil brush with paint and dab over the design, working from the narrow end to the wide end. At the wide end, lift your stencil to reach areas covered by tape. Use a wide paint brush and water to pull the paint away from the edge of the stencil, following the grain of the wood and creating a softer, "stained" color transition. Remove stencil and allow to dry. 9. Repeat the previous step, placing the stencil around the axis until the full, circular mandala is complete. 10. Layer two or three stenciled mandalas using harmonious paint colors. Paint the edges of the panel with one of the colors. 11. Clean your stencil with soap and water. 12. Once dry, seal your painting with a gloss or matte acrylic varnish on the front, sides, and back of the panel.