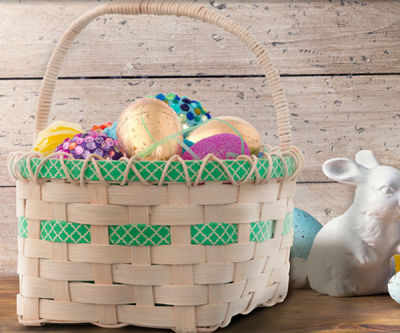 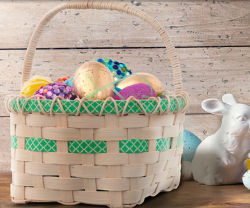 Learn to weave the perfect picnic or Easter basket. This project teaches the basics of basket making using flat and round reeds with a washi tape twist. Start with the basics, then move on to create larger and more intricate baskets.

1. Cut 12 pieces of the flat reed so they're 30" in length. Bend each reed to find the "bad" side — the side that splinters. Use a pencil to mark the halfway point on the "bad" side of each reed. Soak the reeds in warm water for five minutes. 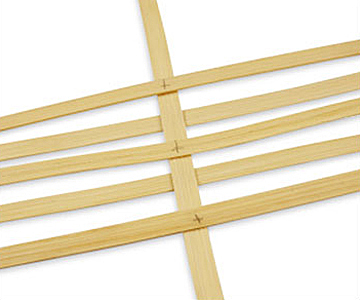 2. Begin assembling the basket base. Lay five pieces of reed side by side, with the "bad" side up. Line them up so the halfway-point marks line up. Place a heavy ruler or object on one end of the reeds to hold them in place. Weave another piece of the flat reed into the base using an under-over pattern to weave it into all five base pieces. 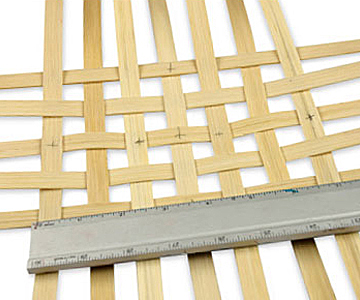 3. Weave the remaining flat reed into the base, alternating the weave so if one starts under the base reed, then the one next to it should start over that reed. 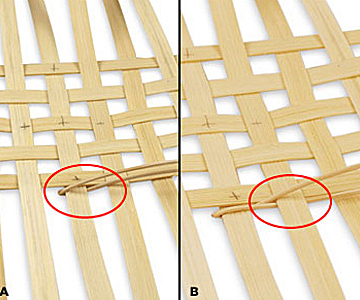 4. Soak a long piece of the round reed in warm water for five minutes. The reed should be more than long enough to go around the base. Once it's done soaking, find its middle by folding it in half — but don't crease it. Instead, use a pair of long-nose pliers to crimp the middle. To twine the reed around the base, slip one of the flat reeds on the weaved base into the fold of the round reed like in picture A. Don't start in a corner — start with a middle piece. Keep the round reed above the weaving, and slip the top end of the reed under the next base piece, like in picture B. 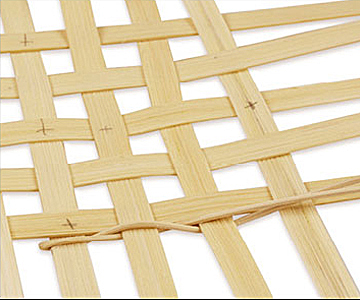 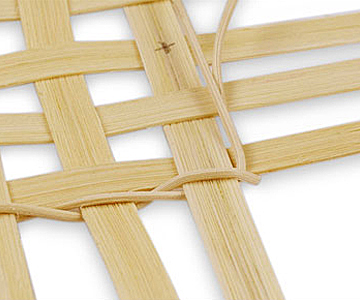 6. At the corner of the base, weave the top piece of round reed under as it goes around the corner like in the image above. Repeat until you go all the way around the base. The twining should be nestled in close to the weaving. 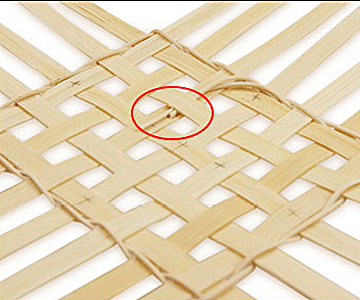 7. Weave all the way around to the starting point. Cut the excess reed and tuck the end pieces into the weaving. 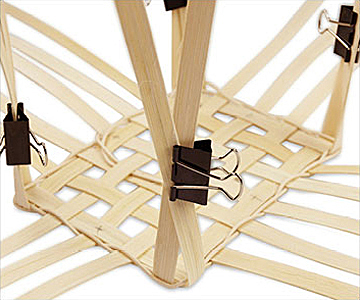 8. Soak the base in warm water for five minutes. Then, carefully fold up each reed in the base next to the twined reed. To help shape the basket, clip the corners together with binder clips or clothespins. The folded-up reeds on the base are now called "stakes." 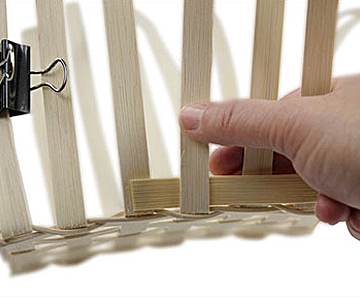 9. Cut seven pieces of flat reed long enough to go around the basket base. These are called "weavers." Soak the weavers in warm water for five minutes. The "bad" side of each weaver should face the inside of the basket. Start at one of the middle stakes of the base. Lay the new reed on top of the stakes about two-thirds of the way across it. The weaver goes behind the next stakes as in the picture above. Use a clip or a clothespin to secure the end of the weaver to the starting stake. 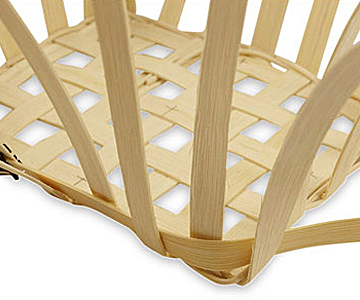 10. Alternative the weaver over, under, over, under. To weave around the corners, remove the clips on the corner and then re-clip them so the corners stand up. This helps to shape the basket. 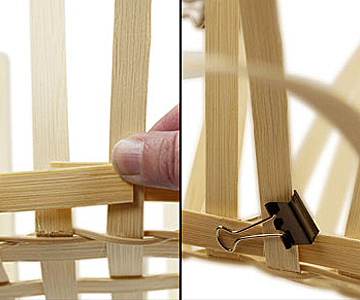 11. When the weaver has gone all the way around the basket, extend it past the starting point so it goes two-thirds of the way across the next stake and the start of the weaver. Clip or pin to secure. 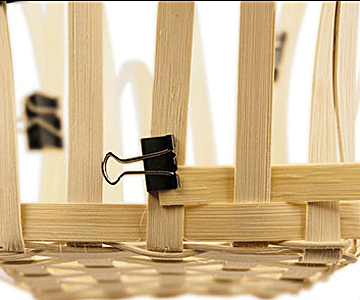 12. To start another row, always start a weaver going over the stake, turning the basket 90º with each new weaver. This creates the over-under pattern. Repeat steps 9 through 11. After weaving three or four rows, there's no need to keep the corners clipped or pinned. The weavers should be pushed together tightly. 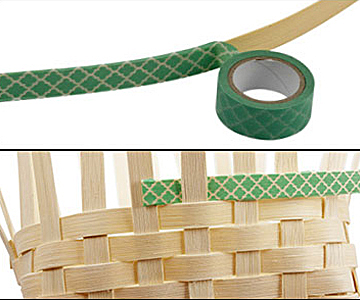 13. Use washi tape to add color and pattern to the weavers. Start with a completely dry weaver or the tape won't stick. Cover the "good" side of the weaver with 1/2" thick washi tape, and then weave it into the basket like in the previous steps. The washi tape weaver didn't soak, so it will be a little stiff and more difficult to weave. 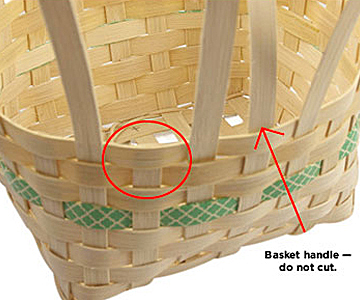 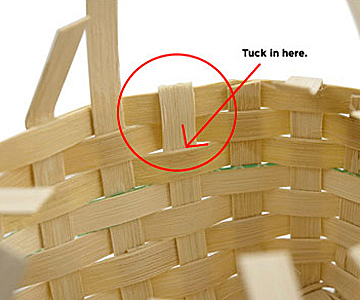 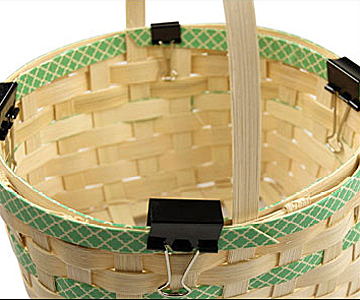 16. To add a rim, cut two pieces of flat reed long enough to go around the basket. Add washi tape to the "good" sides of both of these reeds for added color. Wrap one reed along the outside of the basket, high enough to cover the edges of the folded and cut stakes. Clip it to the basket to secure it. Do the same thing with the other reed, but run it along the inside and clip it in place. 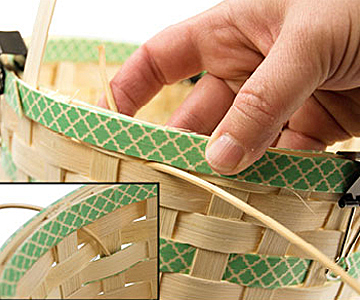 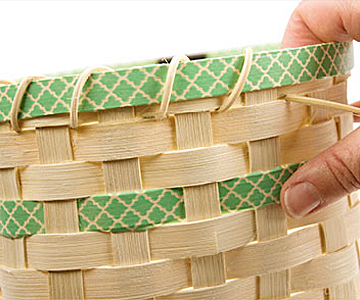 18. Wrap the round reed around the top of the basket and push it through the space between the bottom of the rim and the next stake in the basket. Pull it tight, and continue all the way around the basket. 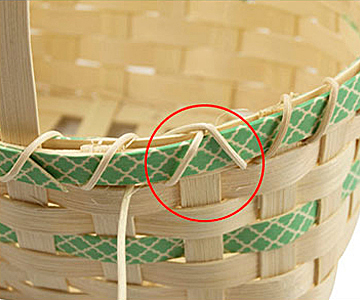 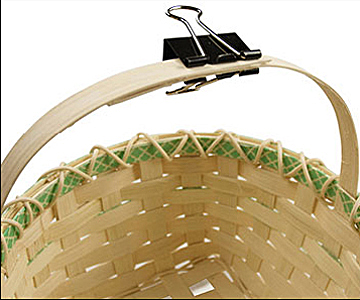 20. Start the handle by soaking some round reed in warm water. The reed should be very wet so it won't crack. Bend the handle stakes toward each other until they create an arch. Clip the bent ends together. 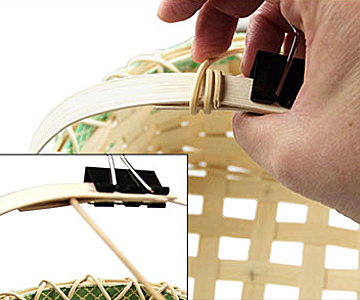 21. Tuck one end of the round reed between the center of the handle stakes. Gently wrap the reed around the stakes. 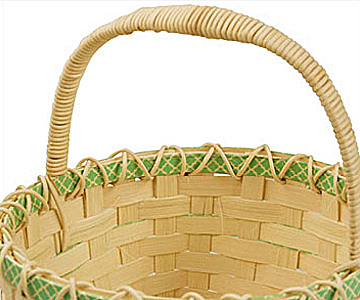 22. Wrap the reed all the way down the handle. When you reach the rim, cut off the excess reed and tuck it into the rim. Repeat step 20 for the other half of the handle. 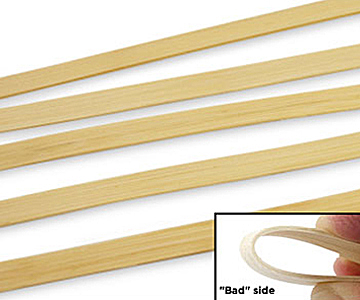