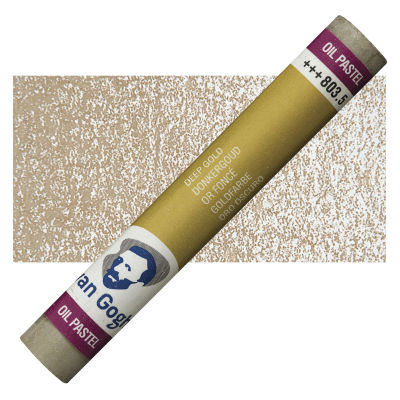 Use the following buttons to zoom in and out of the image
Deep Gold
Current price:

Bronze is a metallic alloy with copper as its principle constituent and tin as the main additive. It often contains other elements, which may add color or luster. Brass is a variant of bronze, in which zinc replaces tin as a main additive.

Powdered bronze, considered a metal rather than a pigment, produces interference and metallic effects.

Bronze is stable in oils, but it may react with moisture and oxidize to a greenish color in water media. Bronze has a much higher resistance to corrosion than pure copper.

Bronze alloys include many variants in which traces of toxic heavy metals may appear. Traditional bronze produced from copper and tin is not bioreactive and is therefore non-toxic, although fine particles may be irritating.

The Bronze Age is the traditional name for a stage in the development of complex societies, characterized by bronze metallurgy. In the societies of the Near East, the Bronze Age began around 3,000 BCE and was supplanted by the Iron Age around 1,200 BCE. Bronze metallurgy appears to have developed independently in China, without outside influence, around 2,000 BCE. In both the Near East and the Far East, bronze was used for artistic and decorative purposes, as well as in weaponry.