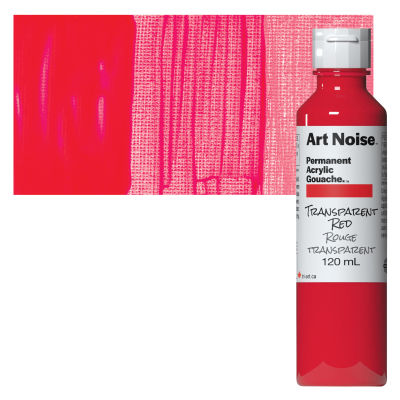 Use the following buttons to zoom in and out of the image
Tri-Art Art Noise Permanent Acrylic Gouache - Transparent Red, 120 ml, Bottle with swatch
Current price:

Lithol Rubine is a deep transparent red dye, generally slightly bluish, that is laked as a salt with sodium or calcium to form a pigment.&nbsp; PR57 is the sodium salt, and has a more bluish tone. PR57:1 is the calcium salt, and is the most widely used. Lithol Rubine makes clean pinks when tinted. Sources vary greatly in hue and transparency. Lithol Rubine has high tinting strength.

Lightfastness is considered only fair to good. Superior products are available when lightfastness is paramount. Where greater lightfastness is needed in process color printing, the more expensive pigment PR184, a Naphthol AS pigment,&nbsp; is often substituted for Lithol Rubine.

Lithol Rubine is not considered toxic. It is used in food, drugs, and cosmetics, such as lipstick. It can be used in art materials intended for children.