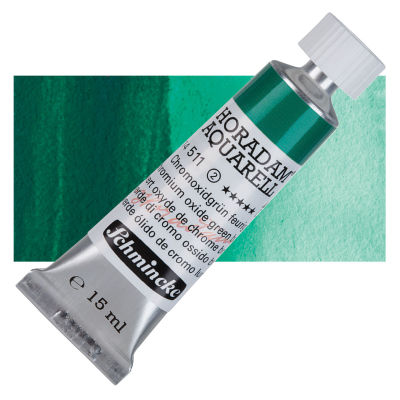 Use the following buttons to zoom in and out of the image
Chromium Oxide Green Brilliant
Current price:

Viridian is the standard green and is stable, powerful, and cold with an emerald green undertone. It has a transparent hue, good tinting strength, a dark masstone that can be almost black at full strength, and a slow drying time in oil form. Viridian is commonly replaced by the darker, more saturated, and staining Phthalo Greens, but its properties make it a necessary part of the palette of an experienced landscape painter.

Viridian has excellent permanence, except in high-temperature work, and is highly valued as a glazing color.

Viridian&rsquo;s name comes from the Latin viridis, meaning green. The process for manufacturing Viridian, or Transparent Oxide of Chromium, was patented by Guignet in Paris in 1859. However, it had actually been discovered by Pannetier and Binet in 1838. Viridian replaced Verdigris, which was reactive and unstable, and Emerald Green, which was a poisonous copper aceto-arsenite used as a rat poison in the sewers of Paris.