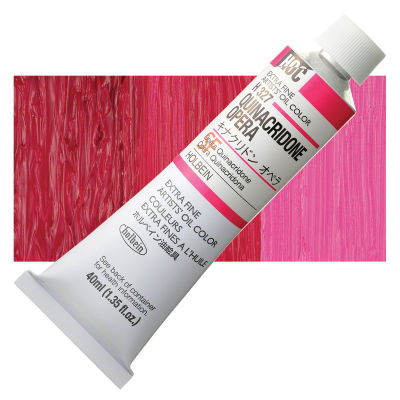 Use the following buttons to zoom in and out of the image
Quinacridone Opera
Current price:

Rhodamine B is a staining violet dye that has fluorescent properties. It is extremely soluble in both water and alcohol. In art materials it is laked as a pigment.

Rhodamine B, like all fluorescent dyes, is not considered to be lightfast. It is recommended for permanent works of art only if they can be adequately protected from exposure to ultraviolet light.

The fluorescent dye Rhodamine B is toxic, and its use is banned in food, textiles, and cosmetics. It is harmful if swallowed, inhaled, or absorbed through the skin. It has been shown to be carcinogenic in rats when injected subcutaneously, producing local

Rhodamine B, discovered in 1887, is used as a staining fluorescent dye in the biological sciences, for microscopy. It is also used as a laser dye. Because of its low cost, high tinting strength, solubility in water and alcohol, and relative stability for a fluorescent, it has sometimes been used as a food colorant, even though its use in food and cosmetics has been banned in most countries for many years. There have been several highly publicized recalls of food and cosmetic products contaminated with Rhodamine B.