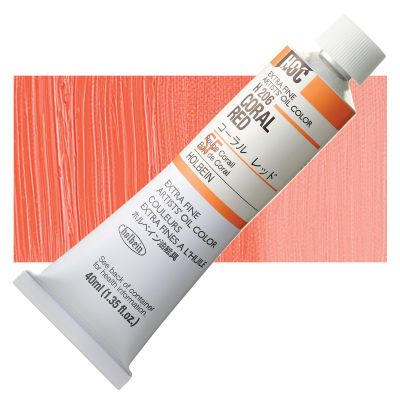 Use the following buttons to zoom in and out of the image
Coral Red
Current price:

Cadmium Red is a bright, warm red that ranges in shade from orange-red to maroon and is available in light, medium, and dark versions. It is strong and opaque, with good tinting strength. Cadmium Red dries slowly. It grays down when mixed with white, mixes well with blues to create a range of browns, and mixes well with Cadmium Yellow to create a strong orange. It also works well in neutral mixes. Cadmium pigments have been partially replaced by azo pigments, which are similar in lightfastness to the cadmium colors, cheaper, and non-toxic. Hues vary by brand. Cadmium Red is usually available in either a pure grade or a cadmium-barium mix. The cadmium-barium mix has the same permanence as pure Cadmium Red, but it has a lower tinting strength.

Cadmium Red is lightfast and permanent in most forms, but like many cadmium pigments, it will fade in fresco or mural painting. Its improved lightfastness has helped it to replace Vermilion on the artist&rsquo;s palette.

Cadmiums get their names from the Latin word cadmia meaning zinc ore calamine, and the Greek word kadmeia, meaning Cadmean earth, first found near Thebes, the city founded by the Phoenician prince Cadmus. Metallic cadmium was discovered in 1817 by Friedrich Strohmeyer, but Cadmium Red was not introduced until 1907 in Germany.