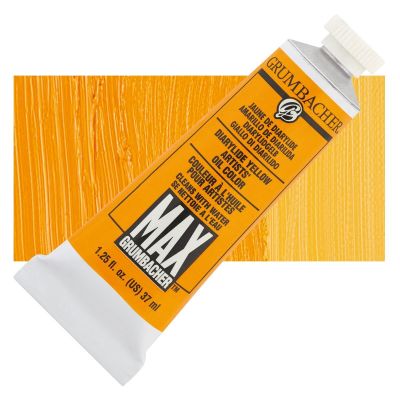 Use the following buttons to zoom in and out of the image
Grumbacher Max Artists' Water Miscible Oil Color - Diarylide Yellow, 37 ml tube
Current price:

Lithopone is a low tinting strength, semi-transparent white pigment that is often used as a filler or extender in other colors, or as the base for laked pigments.

Lithopone is absolutely permanent and lightfast.

Lithopone is not toxic.

Lithopone was discovered by G.F. de Doubet in 1850. It&nbsp; was developed commercially in the 1870s as a substitute or supplement for lead carbonate, to overcome the many shortcomings of white lead pigment, including toxicity, poor weathering, and darkening in the presence of sulfur compounds. It is used most often in interior paints and enamels. Its use as a white pigment has been superceeded in many applications by titanium dioxide.