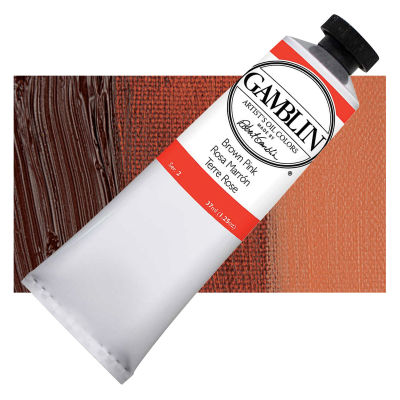 Use the following buttons to zoom in and out of the image
Gamblin Artist's Oil Color - Brown Pink, 37 ml tube
Current price:

Perylene Red is a moderately intense, semi-opaque, medium red pigment, appearing somewhere between a Cadmium Red and a Cadmium Deep Red hue. It has excellent brightness and tinting strength. Its partial transparency makes it useful as a glazing color.

Perylene Red has good lightfastness and permanence. Its tints may darken after extended exposure to sunlight. It is not considered suitable for exterior use.

Perylenes have been used as vat dyes since 1912, but they were not manufactured and sold as pigments until 1957. For artists, they are a replacement for historic colors that were made with berries, and are significantly more lightfast.