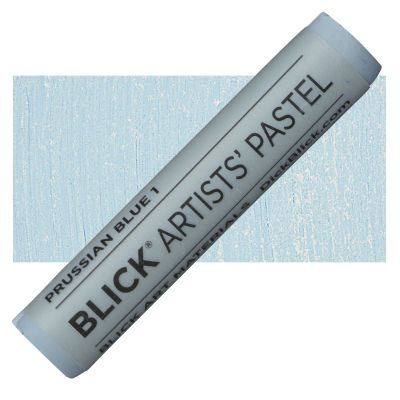 Use the following buttons to zoom in and out of the image
Prussian Blue 1
Current price:

Prussian Blue is a semi-transparent, deep cyan-blue with a greenish undertone and a very high tinting strength unequaled by most pigments. It is similar to Phthalo Blue unless mixed with white, when it gives up intensity and becomes smoky. It can behave erratically and less reliably in oil and watercolor form depending on its manufacture. For permanent painting Phthalo Blue is considered a more reliable choice.

Prussian Blue is lightfast and permanent in all techniques except for fresco.&nbsp;When mixed with Zinc White in watercolor or tempera form, it fades upon exposure to light&nbsp;and&nbsp;completely regains its chromatic strength in the dark. Modern manufacturing techniques have made this tendency less of an issue in recent years

Prussian Blue is moderately toxic if ingested. It will emit toxic hydrogen cyanide gas if heated, exposed to ultraviolet radiation, or treated with acid.

&quot;The first of the modern pigments,&quot; Prussian Blue is the first artificial pigment with a known history. It was discovered by accident in 1704 by the Berlin color maker Heinrich Diesbach, who was trying to create a pigment with a red hue by mixing iron sulfate and potash. The potash Diesbach purchased from a local laboratory had been contaminated by animal oil and blood during previous experimentation. The resulting mixture yielded a very pale red that changed to purple and then deep blue when he tried to concentrate it.&nbsp;Since previous blue pigments came from lapis lazuli, an expensive stone, Diesbach&rsquo;s discovery was extremely important for artists of the time.